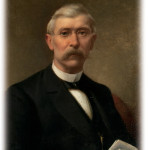 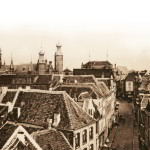 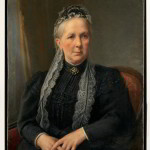 Lodewijk van der Grinten, pharmacist at Steenstraat in Venlo, is more a social person than a businessman. He likes being seen in social life.
Like his descendants later on, Lodewijk distinguishes himself as an inventive scientist. He is active in improving tap water and designs a device for filtering contaminated water, that is scientifically tested in Amsterdam. Although this invention pays him a lot of credit, it does not bring him much prosperity. In the meanwhile, Lodewijk has numerous contacts in (applied) scientific circles, especially in the South of the Netherlands.

Lodewijk’s chemical background shows when, in 1871, he starts an investigation into the production of butter coloring, a substance used to color both butter and margarine. In 1877 Louis succeeds in manufacturing his product on a larger scale and selling it to the butter and margarine trade. The production of butter coloring quickly proves to be more lucrative than the pharmacy, and marks the start of a success story.

Lieske Muijsers comes from a well-to-do agricultural family in North Limburg. In 1862 she marries Lodewijk van der Grinten and they have ten children. Lieske lives to a high standard of “thoroughness” and has business insight. She has always been an authoritative figure in the family.

When butter trader and margarine manufacturer Anton Jurgens from Oss comes to Venlo in person to buy the recipe for Lodewijks butter coloring, it is Lieske who says: “Did he come to Venlo for that? Then you shouldn’t sell it, you can earn money with it ”. Lodewijk follows her advice and starts producing his butter color himself. Lieske thus gave the impetus to the later world concern. 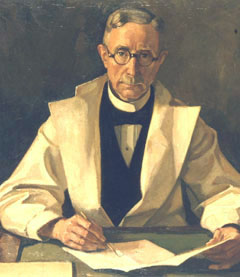 Frans van der Grinten, the third son of Lodewijk, follows in his father’s footsteps. He takes his pharmacy exam in 1887 and follows a study in dye chemistry. A serious illness of his father forces him to abandon his work on a dissertation in 1890 to take over the management of his father’s company.

Frans honors the principle of specialization and focuses primarily on the manufacture of butter coloring.
The pharmacy is taken over by his brother Wiel, while Frans builds a larger production area for the butter coloring behind his house. A new, larger factory building in Venlo follows in 1902. He develops production into a great international success.
However, when sales collapse during the First World War, Frans looks for other products and encourages his son Louis to develop them.

Frans is seen as a demanding employer, but is also particularly involved in the safety and health of his people. For example, he develops a compressed air mask that protects employees in the factory against the dust that is released in the factory.

In 1941, Frans van der Grinten transfers his company to his sons Louis, Piet and Karel. 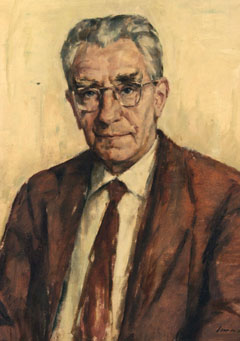 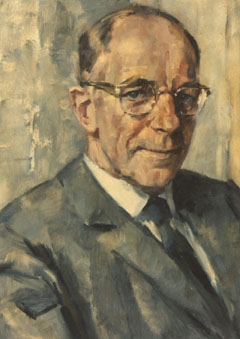 The children of Frans van der Grinten resemble their father. The first, second and fifth sons, Louis, Piet and Karel respectively, continue their father’s company.Together they lay the foundation for the expansion, which will ultimately leads to the international character of the current Océ group. And how little they may resemble each other, as three-person board, they always know how to work closely together and to come out as a unit.

The oldest son of Frans is Louis. He also inherited the chemical genes of the family and the inventive nature of his father. In 1926 he applied for a patent in the field of the semi-dry diazotype: a new copying system. Ongoing chemical developments lead to the foundation of NV Chemical factory L. van der Grinten in 1928. From the marriage of Louis with Eugénie Schrijven four sons are born.
Louis van der Grinten introduced the copying activities in the company.

The second son of Frans is Piet. He enters the company in 1922. As a confidant of his father, he soon gets great responsibilities. He is manages the Butter Color Factory (up to the age of 70!) and is responsible for financial and administrative management. He is also involved in purchasing.
Piet is a distant, not very dogmatic, but very law-abiding Catholic. His home is a welcoming home for musicians, writers and artists. Piet is known as a man with a good sense of humor and as a sporty figure. He marries the Norwegian Mimmi Flattum, with whom he raises six children.
Piet retires from the management of the company in 1965. He will remain a member of the Supervisory Board for a few more years.

The fifth child of Frans van der Grinten is Karel. Because foreign universities are held in high regard by his father, Karel goes to study in Zurich and Geneva.
Unlike his brothers, Karel loves to travel. His first big trip takes him to the Balkans in 1927. Later he visits the Far East, Argentina, Colombia, Egypt, Italy, Mexico and Uruguay, among others. He maintains business contacts everywhere and as a result, helps build a worldwide network of licensees.
Karel and his French wife Nito Fromageot have eight children.
Karel van der Grinten is Chairman of the Board from 1964 to 1967. He is subsequently a member of the Supervisory Board until 1972.

Jan van Susante starts his career in the company of his family, the manufacturer of well-known cigars such as Elisabeth Bas and La Paz. After the early death of his first wife, he starts a new career at the age of 26 and goes on to study psychology. In 1948 he joins the Nijmegen Joint Institute for Applied Psychology (“GITP”) as director. This institute becomes a permanent advisor to Océ in 1953. In 1956, Van Susante moves to Océ, where he is chairman of the board from 1964 to 1967, the first non-family member in senior management.
He is not only an entrepreneur, he is also very committed to the protection of nature areas in Limburg and makes significant contributions to the conservation of natural monuments in Limburg.
In 1958 Van Susante introduces the Van der Grinten Chemical Factory, which has been an N.V. since 1952, on the Amsterdam Stock Exchange.