You are here: Home1 / The Museum2 / Themes3 / Experience the 7 Stories of Océ4 / #5: Copies become documents in a networked world 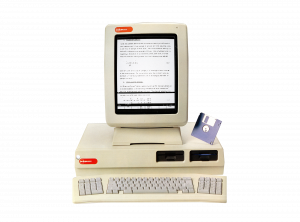 Documents are created digitally on screen and printed on demand. In black & white and increasingly in colo. Small printers pop up on desktops everywhere. But in large organizations, large fleets of desktop printers are costly and inefficient.

There’s a better way: network printing, and Océ emerges as a leader. Users create documents on screen then send them over the network to their digital mailbox at the reliable Océ printer/copier down the corridor, or downstairs in the central repro department, or down the road to the copy shop, or around the world via the worldwide web.

Océ digital network printers for office documents and technical drawings become market leaders in Europe and the USA. It’s a networked world. Copies become documents. Océ is one of the frontrunners.

In the mid-1990s, the company adds new dimensions to its digital offering. Océ purchases the high performance printing division of Siemens-Nixdorf, with headquarters near Munich, Germany. This positions Océ as a global leader in high-volume printing systems.